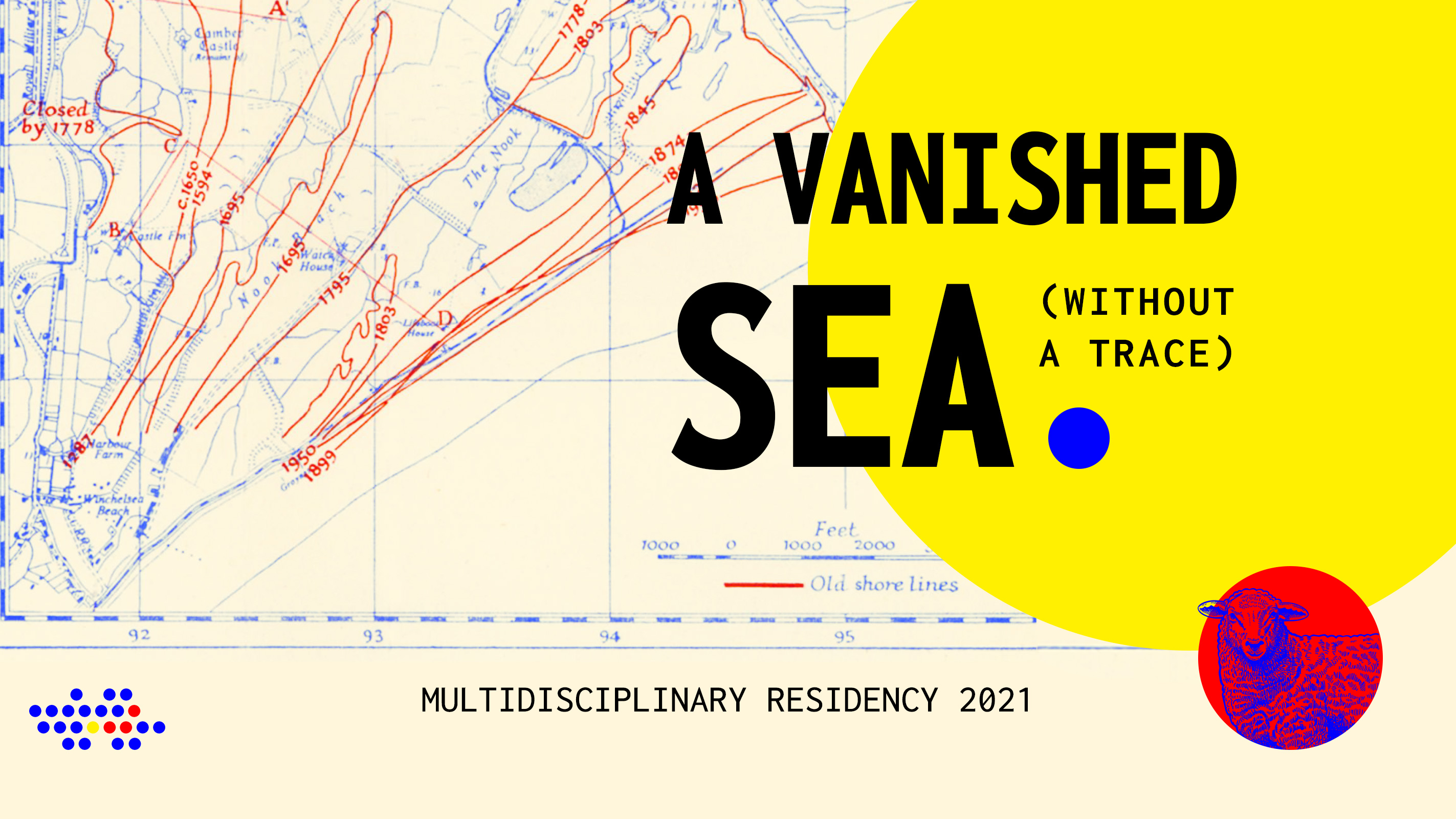 Climate Art and Bridgepoint Rye, in collaboration with Sussex Wildlife Trust, are delighted to announce a multidisciplinary residency for artists, creative practitioners, and environmental researchers to work on a site-responsive project during a three-month residency at Bridgepoint Creative Centre in Rye, East Sussex.

The residency will take place in April – June 2021.

The programme – A Vanished Sea (Without a Trace) – has been generously supported by Bridgepoint Rye and the Kowitz Family Foundation.

The picturesque ruin of Camber Castle lies peacefully amid stretches of marshland over 1.5 km from the coast. It seems hard to believe that the splashing of the sea was once a constant sound here, rather than the bleating of sheep. Built on a shingle spit during Henry VIII’s rule, Camber Castle used to be an elaborate artillery fortification designed to defend the harbour and the towns of Rye and Winchelsea. Less than a hundred years after its completion, however, it was decommissioned – the receding sea left the castle inland, stranded and useless.

During the residency, participants are invited to explore the broad themes of transience, ephemerality and perishability. From species extinction and habitat destruction to the impermanence of our familiar way of life, the discussion of these subjects has already become a part of our everyday conversations as we reflect on the changes forced upon us by the Covid-19 pandemic. Is a more nuanced understanding of transience a cause for resignation or an invitation to transform the relationship between human beings and other species?

The programme – A Vanished Sea (Without a Trace) – will see 3 UK-based practitioners develop their site-responsive projects during a three-month residency at Bridgepoint Creative Centre located in Rye, East Sussex. Residents will also have access to Sussex Wildlife Trust’s sites located in Rye and an opportunity to work with the organisation’s staff and volunteers.

Unexpected equivalences—between predator drones and green screens, disco balls and hellfire missiles, nightclubs and war zones—often lie at the heart of Alistair Debling’s research-based practice. Though his work pursues diverse lines of inquiry, from queer nightlife and ecology to the military-industrial-complex and its architectures, he is continually drawn to the question of what it means to survive. In the context of a global pandemic, amid ecological breakdown and perpetual remote-controlled warfare, he asks: what might survival look like?

With an experimental approach to form, Debling’s practice encompasses a broad range of time-based media, from video installation and live performance to alternative eco-film processes and AI-generated imagery. His work has been presented by the Whitney Museum of American Art (New York), Hauser and Wirth (Somerset) and the National Theatre of Great Britain (London). He has won support from the Goethe Institut and the British Council and has been awarded the Red Mansion Prize (2018), Erna Plachte Award (2017) and the Louis Sudler Prize (2016).

Mo is a multi-disciplinary environmentalist in the movement for climate justice. Her background in environmental biology wholly informs her creative practice and Mo often combines scientific methods with artistic communication to connect communities to weird and wonderful elements of nature. Her focus is always on the hyper-local - it's wrong to assume that people growing up inner city can connect with melting ice caps in Antarctica. Her project 'Mapping Greenness' used a giant helium balloon to map, analyse and artistically respond to greenspace in the public realm in Nottingham. Art is the best tool for creatively imagining a future where humans and nature live symbiotically. Once we imagine, we have something to work towards. And this has never been more important.

Joseph is an Architectural Designer and the creator of Bamboology, designing and constructing unique environments from Bamboo and other organic material. Joseph completed his undergraduate architecture studies at Oxford Brookes University. He then worked in a London based architectural practice before heading to Joshua Tree, California to build with the artist Gerard Minikawa. This period has hugely influenced Joseph's present work, by being immersed in a world of bamboo craftsmanship and pioneering shade structures. Upon his return to the UK, Joseph gained more experience as an Architectural Designer after moving back to his hometown of Rye and Hastings.

Joseph is passionate about harnessing the incredible natural properties within nature's design through low energy constriction techniques.  Recently this has manifested its self in the design and construction of The Traveling Temple at Great Dixter House and Gardens. He sees each project as an opportunity to engage in the unique qualities of a site and the socially sensitive process of place making. It is a vision of living, loving, and dancing lightly on the earth with bamboo and colour.

We are committed to ensuring the safety of all residents, especially during the ongoing Covid-19 outbreak. We shall therefore be keeping the programme dates and format under constant review, in line with the latest governmental guidance. At the same time, we believe that now, as never before, the need for the exchange of ideas and community-focused projects is of paramount importance.

Bridgepoint is a new arts complex located in Rye. It is set in the context of a regeneration project, being undertaken by Martello Developments, which aims to convert a disused industrial part of the historic town into a vibrant campus, including an arts complex as well as housing and commercial activity.

It is intended that the 20,000-square-foot Bridgepoint arts building will encompass artists’ studios, a large performance and rehearsal space, a commercial gallery, as well as other internal and external exhibition spaces.

The primary mission of the project is to provide a well-equipped and safe space for artists in an array of disciplines to contemplate and create, hopefully drawing inspiration from the area’s exceptional history and natural beauty.